In memorium to my friend, Bowser 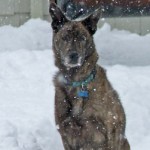 I was asked by Marilyn’s Voice, a dog shelter that I’ve done some pro bono work for, to write a short something about my late, beloved dog, Bowser. I wrote the following:

I got Bowser from the Cleveland APL when he was about 6 weeks old. He was a wolfish mix; his litter found in an abandoned building downtown. I spent the next 8 years trying to domesticate him – to make him heel when we walked, to not hunt squirrels and cats and other such things that undomesticated animals instinctually do. I read books on this and tried to teach him so much. He seemed to understand nearly everything I said, but did his own thing his own way regardless.

Around his eighth birthday, I had the sudden realization that we were on the back end of his life and that I was going to accept him just as he was – I wasn’t going to try to train him anymore and I would enjoy each remaining day that I had with him. That day was the beginning of the most beautiful relationship that I can imagine. We both began to transform. I always had unconditional love from him, but he didn’t from me until that day. Bowser taught me far more than I ever taught him.

He went peacefully in his sleep Tuesday, February 22, 2011. I’ll always love and miss him.