Merle coming to us from Reno, NV.  as he and Annemarie are considering moving there.

Krystal and Saagar leave The Hill! Their new channel is Breaking Points. They do a great take on the article below : https://www.youtube.com/watch?v=guUHWfxgsaY

Criminal “kingmakers” tricked into using FBI-run messaging app – https://cbsn.ws/3wePqJC
The app was part of a worldwide sting called operation Trojan Shield, which was led by the FBI and involved the U.S. Drug Enforcement Administration, the European Union police agency Europol and law enforcement agencies in more than a dozen countries.

Chris Harrison demanded $25 million as part of exit package from The Bachelor because ‘he has nearly 20 years of dirt’ – https://bit.ly/2Timfqs

Merle recommends movie, Greenland – HBO Max — A family embark on a perilous journey to find sanctuary as a planet-killing comet hurtles toward Earth. Amid terrifying accounts of cities getting levelled, they experience the best and worst in humanity. 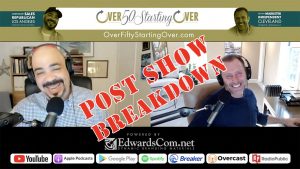 BONUS: After show wrap up —>  https://youtu.be/PgsdHr31pxM

Write in and share your questions or insight at:

This site uses Akismet to reduce spam. Learn how your comment data is processed.

Don't miss out–Get your O5Opodcast episodes and freebies right to your email box!

Just a bunch of friends trying to improve a little bit more each week!

You've successfully subscribed! Welcome aboard. Don't hesitate to reach out and ask questions!